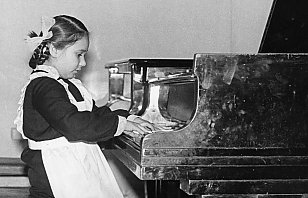 …Julia Goldstein as a child in Moscow

From 2019 the pianist and piano educationalist Julia Goldstein has taken up the distinguished task of developing an excellence piano class for talented young pianists at the FILUM music school in Filderstadt. This new project enables Julia Goldstein to fulfill her wish to combine the educational and the artistic at the highest level. By now, many students of Julia Goldstein – including Igor Levit, Jinsang Lee, Konstantin Semilakovs, Nicolai Gerassimez among others – have become well known musicians; they give concerts all over the world and have been appointed as music professors at renowned universities.

By the time she was fourteen years old, Julia Goldstein had won first prizes in the “Jugend musiziert” competition, at the Grotrian Steinweg Competition in Braunschweig and at the “Concertino Praga” Competition in Czechoslovakia, followed by a concert tour. In 1980 she toured Portugal with the Youth Symphony Orchestra of Lower Saxony as the soloist in Grieg's Piano Concerto. Julia Goldstein won yet another first prize in 1981 at the Steinway Competition in Hamburg, and third prize at the International Alfred Cortot Youth Pianist Competition in Milan. It was at this time that she embarked upon her official music studies at the State College of Music and Drama in Hanover. In 1984 she was awarded a bursary from the German People's Study Foundation. She then took a course of study with Professor Sulamita Aronovsky at the Royal Northern College of Music in Manchester, England.

In 1984 Julia Goldstein concluded her music studies in Hanover in Professor Karlheinz Kämmerling's class by gaining her qualification as a state-registered music teacher, graduating in 1986. This was followed by postgraduate studies at the Folkwang College in Essen in Professor Boris Bloch's master class, culminating in 1991 with her concert examination playing Brahms's First Piano Concerto.

Thanks to her close collaboration with her father, the noted Russian violinist Boris Goldstein, Julia Goldstein developed a love of chamber music over the years, and she recorded the Violin Sonatas of Brahms and Franck together with him. She has also played with such well known musicians as Sabine Meyer, Christian Tetzlaff, Christoph Marks, Julius Berger, Alexander Rudin and Kathrin Rabus as well as undertaking a number of concert tours and playing far and wide with many great orchestras – including the Hamburg Philharmonic and the Beethoven Orchestra of Bonn. She has performed at a number of festivals such as “Musikland Niedersachsen” and the Rakhmaninov Festival in Tambov, Russia, and has performed in the Great Hall of the Tchaikovsky Conservatoire in Moscow.

Alongside her solo and chamber career, Julia Goldstein soon made a name for herself as a piano educator. Even at the age of fourteen, she was keenly interested in the educational aspects of various teaching methods and was able after a short time – thanks to her expanding experience – to lay the foundation stone for her own personal method and concept of teaching.

Thanks to the great fortune of having met many of the great and leading music teachers of the late twentieth century and worked with some of them, Julia Goldstein has become familiar with the traditions of various schools, and incorporated them into her own method. Between 1989 and 1997, for instance, she was a regular assistant interpreter at the Schleswig-Holstein Music Festival in the piano courses given by the Russian teacher Lev Naumov.

Between 2002 and 2005 Julia Goldstein taught piano at the Nürnberg-Augsburg College of Music, and from 2015 to 2018 she taught at the Stuttgart Music School.

Her educational expertise in the field of the piano and her personal musical experience are evident in her promotion of exceptional talent and the artistic achievements of her students, many of whom are prizewinners of the German “Jugend musiziert” competition and other German and international competitions.